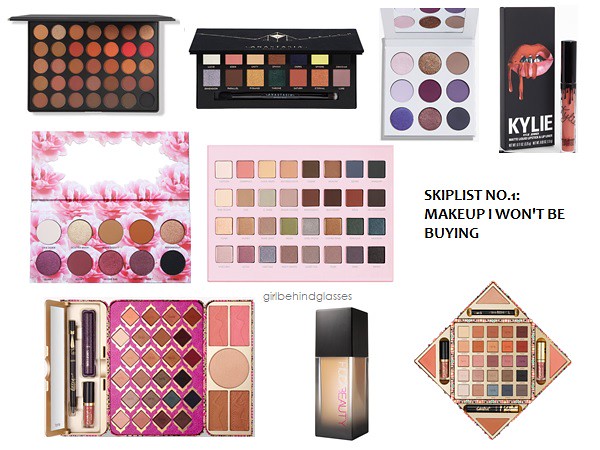 If you’ve been following my blog for some time now, you’d know I have these wishlists that more often than not never get totally fulfilled. Today though, I”ll be doing things a little differently. Maybe you’ve seen other bloggers do an ‘anti-haul’ list, well it’s quite similar to it except I’m labeling mine as a “Skiplist” to contradict my “Wishlist”.

I realize there are a lot of new products out there I’d be skipping out on but these are the one that I have an opinion of.

There’s a buzz created by the announcement of the Morphe 35O2 palette, the sequel to the famous warm-toned 35O palette that had everyone going gaga over. I have the first one and didn’t bother to get the separate matte and shimmer palettes. Honestly, I don’t use the 35O all too frequently so I’m pretty sure I can skip out the 35O2.

After the less than stellar experience I had with the Anastasia Beverly Hills Subculture Palette, I don’t think I’m ready to shell out for their newest Prism Palette. If I were to critic the shades by just looking at them in photos and swatches, it would seem to be loads better than the Subculture but I’m still not willing to risk it. I would have to read thousand of positive reviews for it before I change my mind.

I used to be a fan of Kylie Cosmetics’ 9-shadow palettes. In fact my favorites were her first two, the Bronze and Burgundy Palettes but I’ve noticed how with each succeeding new eyeshadow palette she releases, the quality seems to decline. The last palette I bought from her is the Royal Peach Palette, which I haven’t reviewed mainly because I lost interest in it after better ones appeared later on. So yeah Kylie, no Purple Palette for me. And that goes out to the rest of her Fall collection too.

One look and you’d think that the Laura Lee Los Angeles Cat’s Pajamas Palette would land somewhere in my wishlist and you’re right. I did like the look of the color combination and I even stalked my usual online sellers in Instagram to check who I can contact to get it for me. But after giving it much thought, I came to the realization that the shades in the palette are very dupable and I can probably look for some of those dupes in my own stash.

Every year, Lorac always comes up with a new Mega Pro Palette but last year’s Mega Pro was pretty much enough for me. The only time I used it anyway was when I was testing it out and since then, I’ve barely used it. The latest Mega Pro 4 Palette isn’t even all that enticing to me so I’m going to give it a pass.

The Huda Beauty #FauxFilter Foundation seems like a good choice for oily skin. But after encountering some face products this year that broke me out for its silicone content, I checked the ingredients of this foundation and found silicones are among its active ingredients. But if I am going to be completely honest, I want to try it out just once. I’m not going to invest in a full sized bottle but maybe I can get a sample somewhere, hmmm.

I’ve never seen the appeal of Tarte holiday kits. Yes, you have a little bit of everything but when it comes to being travel-friendly, it fails. I find them too bulky for my liking and really, just how many eyeshadows do you need when you travel? That said, it’s why I’m skipping the Magic Star Collector’s Set and the Treasure Box Collector’s Set.

I would’ve snatched these up in a jiffy have I not been thinking clearly so I think I deserve a pat on the back for excluding these on my wishlist.

How about you, any anti hauls this season?

Hi there! I'm Nikki and I'm a board-certified dermatologist, who's addicted to skincare & makeup. Feel free to send me any questions or messages to my e-mail or DM me in my IG account. Hope to hear from you soon!