Confession time. I had never really invested in an eyeshadow primer (Gasp!) because most of the eyeshadows I’ve been using are quite long-wearing. Viseart, Lorac, Urban Decay, just to name a few.

Whuttt?! A beauty blogger who doesn’t routinely use a primer?! Yeah, that happens.

But when Canmake was finally available over at the Power Plant Mall in Rockwell, Makati, one of the things I bought to try out was their eyebase. Today’s review will be all about that.

Ensures long-lasting eye make-up!
A multipurpose eye make-up base that you can use with eyeshadow, eyebrow make-up, and eyeliner!
Waterproof formulation.
Prevents make-up bleeding, fading, or running.

Packaging-wise, the Canmake Lasting Multi Eyebase comes in a no-fuss black and white plastic squeeze tube. It’s as simple as that. No fancy, shiny stuff. All that matters is what’s inside. And oh boy, did it matter a lot.

For a demo how amazing this primer is, here are a few swatches: 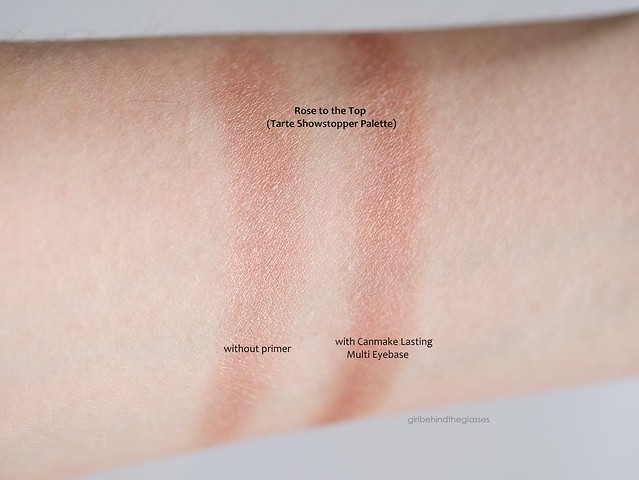 First is Rose to the Top from Tarte’s Showstopper Palette. I’ve been using it frequently since I got it. Tarte’s eyeshadows work pretty awesome in my opinion. They last generally quite well but that did not stop me from wearing them with this primer. From the swatches above, both of them were done with 2 swipes. 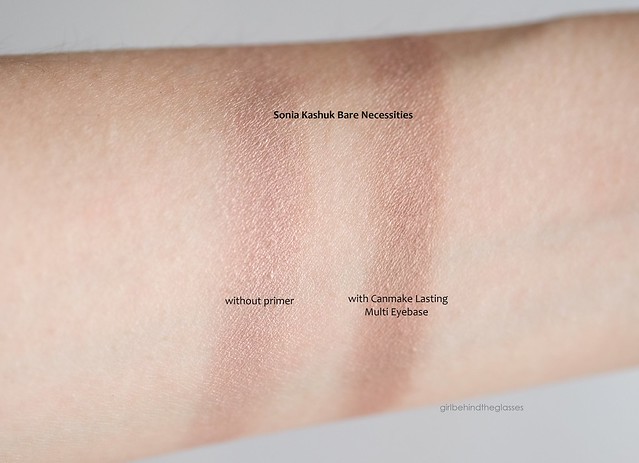 Next is one of the shimmery brown eyeshadows from the Sonia Kashuk Bare Necessities Palette. I featured this palette before for Swatch Day Sunday here. I don’t use it that much because they’re on the sheer side. If you own one, you’d know what I’m talking about. But for your information and enlightenment, the swatch on the left was done with 4 swipes while the one on the right, with the Canmake primer, was only done with 2. Are you impressed yet? I definitely was. 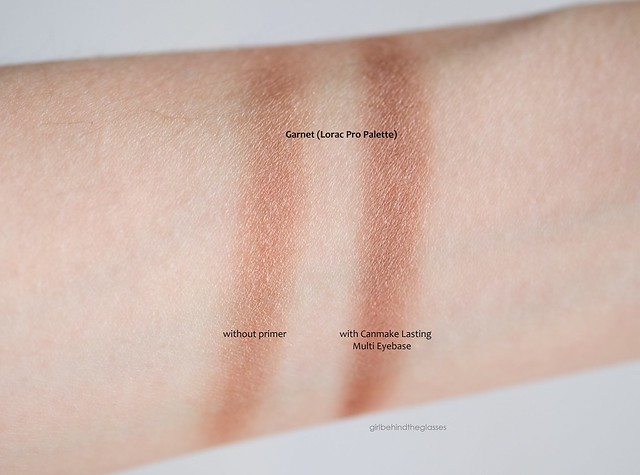 Lastly is this beautiful reddish-brown copper from the Lorac Pro Palette called Garnet. I have no complaints against the eyeshadows from Lorac but as long as I’m comparing swatches for the benefit of this review, it doesn’t hurt to try it with the primer. Again, both swatches were done with 2 swipes.

As you can see from all the swatches, all of them look way more intense compared to those without the use of the primer. In my experience, having this primer makes the eyeshadow last 2-3 hours longer. So, if you want a primer that can pack a punch then you need to consider getting the Canmake Lasting Multi Eyebase primer. Seriously.

One tube amounts to Php 460.00. Canmake is available in PCX’s, Landmark Makati and Trinoma and at Pure Beauty Serendra. You can visit their facebook page here for more information.

Have you tried this primer from Canmake?

Hi there! I'm Nikki and I'm a board-certified dermatologist, who's addicted to skincare & makeup. Feel free to send me any questions or messages to my e-mail or DM me in my IG account. Hope to hear from you soon!